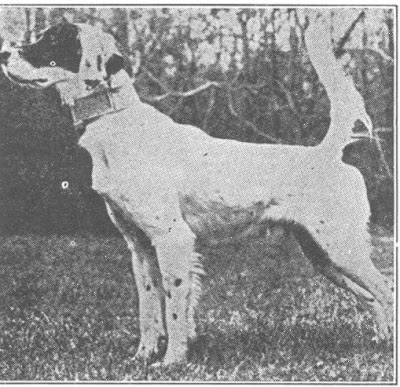 PLEASANT VALLEY CLYDE Paraphrasing the quote that the truly great field trial dog is always on the verge of being lost but comes back perfectly describes the great grouse dog champion PLEASANT VALLEY CLYDE owned and handled by Dr. James Steitler DVM of Dubois Pennsylvania. Doc Steitler could hear a pin drop in the middle of the celebration of a grand slam homerun in Yankee Stadium. He was so attuned to Clyde (or at least it appeared that way) that when most thought he was gone and out of judgment it seldom failed that Doc knew precisely where he was and if he was pointing a bird. Judges, including myself, anticipated Clyde’s brace with both excitement and dread. It seldom failed that Doc would call point after not seeing or hearing Clyde's bell for quite some time. One of the judges would dismount, glance at the other as if to say send a search party if I don’t make it back in two hours and follow Doc well back into the woods and disappear. But, Doc seldom failed to find Clyde majestically pointing a grouse after having pinned it so it could not escape. Clyde was a silky white setter with an evenly marked black mask. He was a relatively large dog with a good deal of leg underneath him and a race you’d think was more suited to all age horseback stakes. He looked very similar to his older kennelmate, CH. Pleasant Valley Liz who won the Grand National in 1972 and 1973. CH. Pleasant Valley Clyde was runner-up in the Grand National Grouse Championship in 1975 and won it convincingly in 1976 and 1979. Clyde’s record was 31 placements, producing 17 winners with total wins of 93. Together, he and Liz produced the wonderful champion Pleasant Valley Mandy.
Posted by Dale Hernden at 7:41 PM

I've talked to some of the more seasoned grouse trialers about Clyde but I've seldom read anything in print describing him. Thanks. Others have laughingly told me Doc never had a handle on the boy, he just followed him until he found a bird. Unlucky for the others he always did. Another story is of Gerald Tracy returning from Marienville after judging Clyde and telling his HB counterparts, 'Boys you count yourself lucky those dogs stay in the woods'!

Anyone that knows Doc knows he was/is one of the most onery cusses you could run into at a trial. I have a good story about my first 'exposure' to Doc for another time, but it is comical. However, outside a trial he is one of the most generous with his knowledge of trials and especially with veterinary knowledge. He is a terrific vet that knows a working dog because he's worked them for 50 years! Very hard to find and I am glad he was around more than once.

I enjoyed this post. Craig's comments below show exactly why you need to share these things with others. For a relatively young guy like me, your knowledge and participation in the field trialing world since the 70's is very impressive. How would it be to have that much condidence in your dog that you call the point when you can't even see him? That is pretty gutsy.