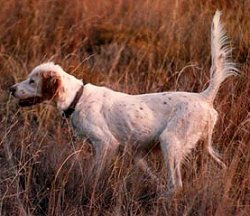 The 1978 Grand National Grouse Champion "GHOST STAR" brought some of the most significant changes to the Grouse woods I can remember and in my opinion started the trend towards smaller, more animated and shorter coupled grouse dogs. Ghost Star was sired by CH.Ghost Train ex Hi Kaliber Tiny. Like her mother, Ghost Star was tiny as well. I don't know for sure but I'd guess she weighed no more than 30 pounds. She was owned by Terry Shermoe and was handled by his son Bryant of Lansing, MI. Up until that time most of the setters that were winning in the grouse woods were larger, more powerful dogs like Pleasant Valley Clyde. The courses in Gladwin and Marienville had grown into pole timber and they demanded a more powerful dog that reached to the limits. A timber cutting program had been initiated at Gladwin and in 1978 the new, very thick popple cover was integrated into the courses. Also important was that Tri-Tronics had introduced the shock collar as a training aid and the A1-70 was now being used by more and more handlers and trainers. Ghost Star reflected the use of the collar in her patterning and took advantage of the new tighter courses. It was obvious she was trained to delve into the cover only so far, turn to the front, cross the course path and work the other side to her perscribed distance, round to the front and cross the path once again. Many trialers thought her pattern was much too mechanical and said she missed alot of good cover and natural objectives by not having the freedom to complete her casts. To her credit though she displayed incredible speed, a cracking high tail and proved she was a very good birdfinder with an exceptional nose. Given the young popple cover and the resulting increase in the number of birds available on the courses, Ghost Star began the trend of much smaller, shorter coupled, closer working grouse dogs that lasted almost 20 years. Personally, I'm not sure the this trend was entirely helpful to the setter breed but nonetheless GHOST STAR's win of the Grand National and the North American Woodcock Championship changed what was expected of cover dog champions.
Posted by Dale Hernden at 12:22 PM

Good points and you are pretty much right about a trend and this likely signifying the start. IMO trials trend like all things. They ebb and flow from one extreme to the other as people do what comes natural and copy success. The zip, snap, and speed became successful, was placed becoming more successful, it was often in a small package and a trend or ebb is started. It appears today IMO there is a flow towards the larger size because as you say the smaller may not have been all that endearing to the long term health of setters. Pointers never really seemed to suffer from this. Likely due to their continued reliance on HB blood for their stock and no real 'woods' line of pointers existing until fairly recently.

Interesting thoughts and the one thing I take from the subject is if you want to play the game for any length of time, you have to be willing to change your ideas, training, etc. because you are always learning. At the same time always have long term health of your kennel and even the breed in mind with what you do. We just had the conversation this weekend that some of the most successful people today in the woods that have been around the longest are successful because they change and adapt on a constant basis. They learn and are not afraid to change.

Thanks Dale for sharing. I appreciate your words of history and respect.

I too was affected by Wayne Fruchey and Vic Christoperson at a Gladwin Trial. Three bird dogs later I still find them rewarding and challenging.
Jim S.