One of my most prized possessions is this bronze of Elhew Secret by Robert G. Wehle. It was a gift to me from Bob during a visit to his winter home in Midway, Alabama. Bob was a wonderful artisan that both sculpted and painted images of his favorite dogs and horses. 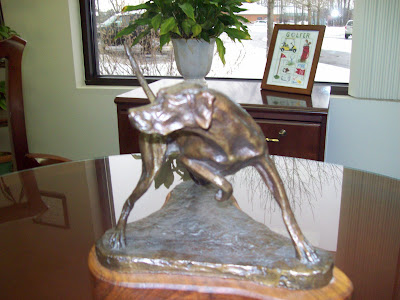 Bob sold many of his creations from his Lime Rock Gallery in New York. 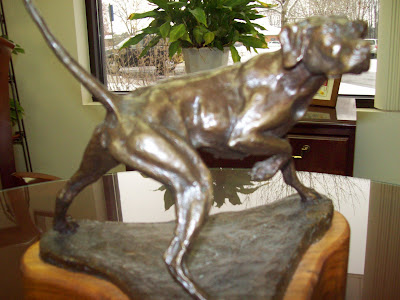 I've been searching for several others he created including the desk size image of Snakefoot. A life size version of Snakefoot was given to the Field Trial Hall of Fame and another to the town square of Union Springs, Alabama where sits atop a marble column inscribed with the names of eleven men from Bullock County Alabama that have been elected to the Field Trial Hall of Fame.
Not many people realized that Bob was not only the squire of Elhew Kennels but an accomplished breeder of race horses, homing pigeons, cattle and an artist extraordinaire.
Posted by Dale Hernden at 8:52 PM

Dale: that sculpture is a great example of how well Robert Wehle knew dogs, and pointers especially. He's someone I would have liked to have met -- and you seem to have been blessed in that regard and in owning such a beautiful piece of sculpture.

Wehle was a man of many talents! That sure is a nice sculpture...thanks for sharing it!

Man, who do you not know? Did you ever meet George Bird Evans or Burt Spiller? They probably did not do much of the field trial circuit. Anyway, it is always fun to hear about all the great ones that you rubbed shoulders with.

Andrew, I did not know Evans or Spiller but I have stayed at a Holiday Inn Express!

Dale, I have a Wehle sculpture, desktop size, how do I find out which dog this is?

Not sure. Email me a picture and maybe I can help DaleHernden@charter.net