Sometimes we need a crash day and especially during January when its so cold and snowy. A few weeks ago I ordered the DVD of the 2008 National Championship at Ames Plantation and the VCR tape of the 1997 Championship that David Grubb won with Miller's Silver Ending from Brad Harter at www.PleasantHillProductions.com 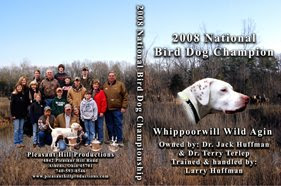 These productions far exceeded my expectations and even had the dogs lifting their heads when they heard the handlers squalling and the shots from their shotguns. Believe me they are the next best thing to being there or being out running your own dog.
Posted by Dale Hernden at 8:18 PM

Dale: will need to check that out! thanks for the tip. and thanks for going through the back-issues of the Regal Vizsla with your usual wit.

Dale - Brad does a good job on his photos and video essays. He did some photos of a trial in California - at the Brooks Ranch in the foothills of the sierras near Jamestown. Beautiful country. It is in his photo hosting - Picassa, I think.

I'm coasting along doing some trails here, and tying flies in anticipation of fishing this Spring and Summer.