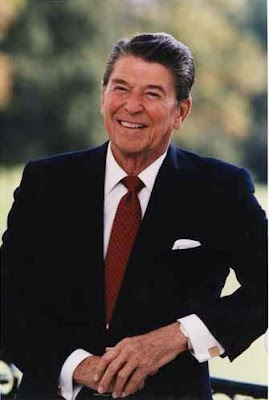 "The problem is not that people are taxed too little, the problem is that government spends too much." " The most terrifying words in the English language are: I'm from the government and I'm here to help." " The government's view of the economy could be summed up in a few short phrases: If it moves, tax it. If it keeps moving, regulate it. And if it stops moving, subsidize it." "The best minds are not in government. If any were, business would steal them away." "Republicans believe every day is the Fourth of July, but the democrats believe every day is April 15." "Politics I supposed to be the second-oldest profession. I have come to realize that it bears a very close resemblance to the first." "No matter what time it is, wake me, even if it's in the middle of a Cabinet meeting." "No government ever voluntarily reduces itself in size. Government programs, once launched, never disappear. Actually, a government bureau is the nearest thing to eternal life we'll ever see on this earth!" "It's true hard work never killed anybody, but I figure, why take the chance?" " If the federal government had been around when the Creator was putting His hand to this state, Indiana wouldn't be here. It'd still be waiting for an environmental impact statement." "I've never been able to understand why a Republican contributor is a 'fat cat' and a Democratic contributor of the same amount of money is a 'public-spirited philanthropist". "Government is like a baby. An alimentary canal with a big appetite at one end and no sense of responsibility at the other." I know in my heart that man is good. That what is right will always eventually triumph. And there's purpose and worth to each and every life.
Posted by Dale Hernden at 10:09 PM

Thank you Dale for refreshing our memory. Leadership is a funny thing. I wonder if President Reagan would suggest spending our way out of the current financial condition when 95% of the population is still employed.

Man, I miss Reagan! I wish he were the one being sworn in today. He was one of the best Presidents this nation ever had. He was a good man first and a politician second. May we see the likes of him in the future of this great nation.