In my 40 years of owning and field trialing pointers and setters I've sold only two dogs. The first in 1979, Dale's Deputy, I raised from a 6 week old puppy to a 5 year old with more than 40 field trial wins. Briar as he was called was closer to me and far more important than my first wife. In the late 70's, Japanese breeders were importing successful grouse dogs to compete in their walking trial and be foundation breeding stock. After several important field trial wins were reported in the American Field, a gentleman named Goro called me from Tokishima Japan and offered me $7500 for Briar. I was dumbfounded and at first dismissed the idea as impossible. Goro kept calling and raising the offer until I just had to take it. In the late 70's that much money could have paid off my mortgage! I took Briar to Detroit's airport with knots in my stomach and almost turned around a dozen times. I'm not ashamed to admit I cried all the way home and was a miserable SOB for six months afterwards. The second was Marti Gras, a successful pointer female that was hit by a car and shattered her rear leg. "Peggy" would never be a field trial dog again and so I sold her to a gentleman from Florida who would foot hunt her and raise puppies. Today, I agreed to sell Rocky back to his breeder Ross Callaway and Scott Hicks, owner of Echo Plantation in Chester, SC. Rocky is an incredible dog. As he got older though, it became apparent that his natural range was going to be way to much for hunting and walking trials. I was faced with having to force his range back down or finding someone who would let him develope his natural abilities. Ross and Scott will do exactly that and I won't be surprised to read, some time in the future, that he won the National Open Shooting Dog Championship. 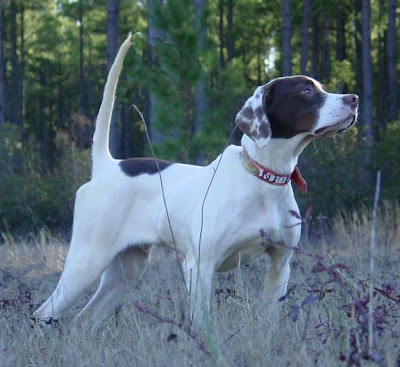 I loved having Rocky. He was as comfortable on the sofa as in the field. He is a very happy guy, very affectionate and just a joy to be around. I told Rocky to call me if he wasn't happy and you'd better be sure I'll be watching to make sure they're treating him like the king he is. Good luck to Ross and Scott.
Posted by Dale Hernden at 5:55 PM

I enjoyed your post. I'm sure it is difficult to give up a good dog. On a positive note, he is going to a place where he'll see lots of birds. I hope he can reach his full potential in his new home. BTW, what the heck do they hunt in Japan?

The corporate titans and very rich have shooting preserves and an active field trial circuit. A large preserve in Japan is 80 acres! They raise quail, pheasant and chukars. I don't know if there are native birds.

I know several people who have gone over there to judge and put on demonstrations and seminars.

It's a tough decision to make, Dale, but it's the best one for Rocky. We say a lot of the same comments when we wrestle with when to let a dog's life end gracefully. Rocky, on the other hand, now gets to go run on birds like a crazy man. And you can bet that he wouldn't be having any where near as much fun in Japan if 80acres is a big preserve.

If you're lucky he'll keep sending you pictures like the one you have posted. That's a fine looking dog!

It's got to be hard to let Rocky go, but it's certainly understandable. It sounds like Rocky is going to a great place. Give him a hug from me!

Dale, I get so attached to my dogs that I can't even let the mediocre ones go. ]:-(

You would know if you made the right decision for Rocky... and now you can focus on developing another young dog.