Isn't blogging great! This past week Lu met her brother "Ted" from California. His owner, Mike Spies blogs at "Living with Birddogs" and we've corresponded for several years now. Mike has been on an extended hunting trip and decided to come to Michigan so we could hunt grouse and woodcock and Lu and Ted could reunite once again. There is no doubt these two are littermates. They look strikingly similar and have much the same personality and idiosyncrisies. They hug just like their mother. 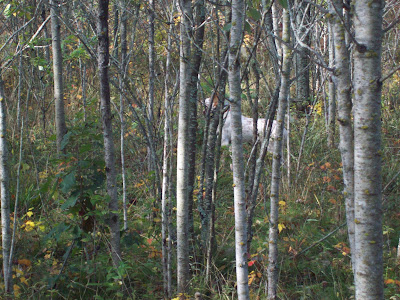 Unfortunately it rained most of the week but Mike got a tour of the AuSable, saw "AL" run in the Michigan Woodcock Championship at Gladwin and had a few chances at hunting woodcock. In the picture above, Ted pointed a woodcock with incredible style. Mike stepped in front of him and out went the bird. I asked Mike why he didn't shoot and he said "I didn't have a clear shot". We got a good laugh over that one when I told Mike that if he saw a bird in grouse cover that WAS a clear shot! 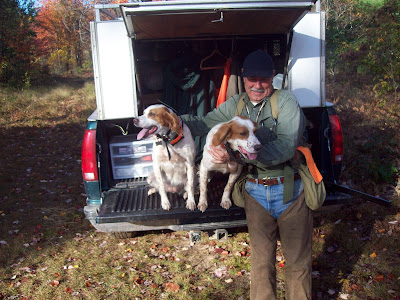 Above Mike, Lu and Ted enjoy a minute together on the tailgate before heading out.

All in all it was a wonderful visit and I'm looking forward to our all being able to hunt and fish together again.

Man...I wish I was there too! Hope you're having a great Fall!

Dale: oh, so right! all these guys from out west used to all their space to shoot... That doesn't excuse my poor form on a couple of genuinely open shots this past week up in Maine, but I will plead that I was so stunned to have open sky behind the bird that I was hypnotized. Hope you were still able to show him a bird or two!

Wish ya'all had come to WI/MN. I'm still trying to back fill my field log. But it looks like we averaged over 4 birds/hr with grouse and woodcock combined. Had some fun hunts and other than some days getting the dogs used to the cover, they were terrific on their birds. Last two days were fun hunts with Mickey having an 8 woodcock find outing (4 woodcock limit shot) and a 4 grouse and 1 woodcock outing (one dead grouse), and Lacey with a 2 grouse 4 woodock outing (3 woodcock shot). Lacey has really been sucking down the grouse finds and running great! Our local, Sig Degitz, has two 1 1/2 yr olds out of Lacey and the female Marley is a grouse finding magnet! Their brother Charlie also won the Wolverine Derby Classic in MI with three broke finds on grouse and woodcock.

I have a really great time in Michigan - thanks to you as a gracious host. Ted seemed to enjoy it as well, and surprised me with his ability to adapt to the much tighter cover.

I am still in Montana, but leave for Saskatchewan tomorrow morning. I have a lot of catching up to do on the blog, and will be posting a loy of stuff when I get back to California.

Thank you very much for your hospitality, again.