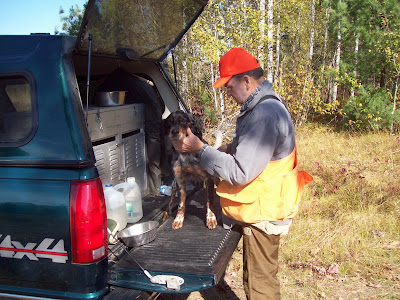 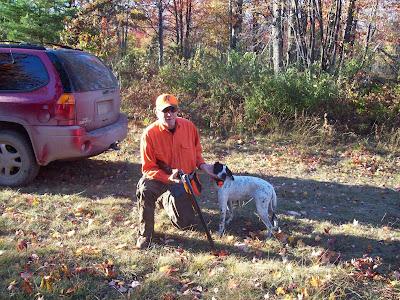 What a pair! Dick and Bill are cousins who grew up together in Oil City, PA and are actually more like brothers. A little birdie told me they were two of the five starting basketball players on their high school team but I didn't ask what their record was. Since they were kids they've hunted grouse and flyfished together.
Dick's the field trialer and his young English Setter "Smoke" was remarkable. He had numerous steady to wing and shot finds on both grouse and wookcock. He's not quite 3 yrs old and will be a consistent threat on the grouse trial circuit. "Emmy", his pointer was still on the field trial circuit with Dave Hughes and didn't make it to Lovells.
Bill's English Pointer "Patty" is the veteran of the bunch. She must have an extraordinary nose as she seems to manufacture birds no matter what the conditions. If I could have but one hunting dog in my life, Patty would be my choice hands down.
Between these two dogs, Dick and Bill probably saw more than 75 grouse this week and we had grill roasted grouse and woodcock every night with our martini's.
Posted by Dale Hernden at 6:25 PM

Gin or Vodka? I hope to meet Dick and Bill and watch their Grouse Dogs!

Hope all is well! I'm headed to Idaho on Thursday!

Nice to see that you're still getting out to chase birds despite the markets and despite Molly's injury.

Personally, if you can find Cold River vodka, that's the secret for a nice martini. Only a couple of weeks till we get to do some serious grouse chasing.